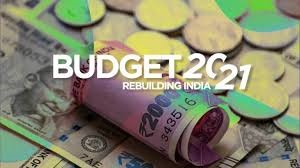 The Union Finance Minister Mrs. Nirmala Sitharaman presented the Union Budget for the year 2021-22. The stock markets have given a Thumps Up to the budget and has been rising for the past 2 days on the back of the growth oriented focus of the budget. We will see some key announcements made in the budget which has given more legs to the stock markets to rally.

Given the constraints on the back of an uneventful year, the Finance Minister was expected to announce a fiscal expansionary budget and indeed it is. The biggest positive had been the focus on higher expenditure particularly on the infrastructure front. This is indeed the prescription given by the economic survey as well as prominent economists. Equity markets saluted the Union Budget 2021-22 and benchmark indices were led by banks owing to host of accountments from taking into consideration of a ‘bad bank’ to recapitalization of Rs 20,000 cr for PSBs and privatization as well of 2 PSBs and a general insurance company. Clearly, with tax collections would still remain constipated in FY22, the emphasis has been on higher divestments and privatization as impinged by the Economic Survey. The Union Budget has laid a foundation for asset monetization via a National Monetization Pipeline and privatization & divestments has been targeted at Rs 1.75 lakh cr. Of course, the Govt. could get closer to the target next year considering the initial public offering (IPO) of LIC will be completed in FY22, and that the Centre had identified four sectors as ‘strategic’ in which government will have a presence. The Govt. has also emphasized on land monetization through SPV route

The FY21 fiscal deficit has been revised to 9.5% of GDP which is much larger than consensus expectations of 6.5–7%. The increase in fiscal deficit is essentially on three counts i.e  Increase in on-balance sheet borrowing relative to government agencies such as the FCI, higher subsidy bill; and higher allocations for capex. For FY22, the FM has gone for steep consolidation, targeting GFD at 6.8% of GDP. However, beyond FY22, the fiscal consolidation path dramtically is much relaxed, reaching 4.5% of GDP by FY26. In fact, consolidation beyond FY22 is likely to be achieved by dint of revenue buoyancy itself rather than spending cuts.

To augment infrastructure financing structure- a Development Financial Institution (DFI) with capital infusion of Rs 20,000 crore has been proposed with an aim to lend portfolio of Rs 5 lakh crore in 3 years. The budgeted capex for FY22 stands at Rs 5.54 lakh crore, against Rs 4.12 lakh cr FY21 BE and Rs 4.39 lakh cr FY21RE. Needless, to say higher healthcare expenditure was on the cards and the Govt. and Union Budget allocated Rs 2.46 lakh crore healthcare budget for FY22 (higher by 137% increase over Rs 94,452 crore in FY21), with Rs 35,000 crore earmarked for COVID-19 vaccine programme. Clearly higher spending on constrained income will lead to higher deficits and the fiscal deficit has been targeted to reach 9.5% in FY21 and would mean higher borrowings to mitigate the same and the Govt. has outlined another Rs 80,000 cr additional borrowings and the Govt. would approach the markets for the same. Most importantly, the next year’s fiscal deficit target has also been outlined at 6.8% and market borrowing of Rs 12 lakh cr. Clearly, with these kinds of spending targets, the fiscal deficit targets are pragmatic to start with, the only fall out being the risks of interest rates to be on the higher side and the bond markets would be looking forward to RBI to pull up some tricks.

We would urge our investors to use this opportunity & invest based on stock specific potential. with our GDP growth likely to be about 9.5% in FY22 albeit on a low base provides comfort post Covid 19. We expect the Indian economy to register 7% growth for the next 5 years and the markets are only poised to go north. We have identified 2 stocks which are our budget picks which have the potential to benefit from the budget-2021-2022 and deliver multibagger returns.